The People who Make it
language
Project: Restructuring of Heesselt Floodplains

In the Heesselt floodplains a lot of work is being done. The goal is to improve safety levels in the area during high water. At the same time we are creating a new 206 hectare natural area. Working on the boundary between land and water.

More and more often the river Waal has to deal with high water levels, increasing the risk of flooding. The restructuring of the Heesselt floodplains should improve water safety levels in the area and allow the Waal to get rid of its water more easily in 2019.

Use of our expertise

On behalf of Rijkswaterstaat, Martens en Van Oord has been working on the restructuring of the Heesselt Floodplains since late 2016.

The work consists of excavating a large secondary trench. The material released is used to fill in old sand mining pits, located nearby in the 7-kilometre-long project area. In addition, Martens en Van Oord is creating smaller secondary trenches and a washlands channel area. Once all the work has been finished, the river area will have a greater throughput capacity, reducing the water level in case of high river discharges.

During the preparation phase of the project, the design was drawn up and the permit applications were submitted. The conditioning work was then started, including the removal of cables and pipes and the performance of unexploded ordnance surveys.

Transport roads were constructed to transport the excavated material quickly and efficiently inside the project area. The equipment was shipped in as much as possible to limit the nuisance caused.

By now most of the total of more than 2 million cubic metres of topsoil has been excavated. Most of the excavated material has been internally transported to the sand winning pits.

Here it is used to shoal the pits from 12 to 6 metres using equipment such as our split barges.

Another smaller part of the material is sold. This creates a complex logistical puzzle, not only because of the various soil types and qualities, but also due to the fact that work is being performed in five different locations within the area.

Many gently sloping banks are being created within the area. This creates good conditions for natural development. The restructuring also contributes to the improved dynamics naturally associated with a river.

For the spatial quality, the design process took into account the retention of cultural and historical values, the summer embankment, the openness of the landscape, the river banks and the washlands channels.

In the first months of 2018 the water level of the Waal rose due to high river discharges and the river overflowed its banks. The work was stopped and the equipment was removed on time. The work could be resumed in early March. These possible circumstances had already been taken into account in the schedule. Most of the work was finished in May 2018.

This project will be completed in April 2019.

Our projects speak for themselves, but our people who make it are the ones we’re really proud of
Here you can read all the Martens en Van Oord #tallstories.

Would you like to know more about Restructuring of Heesselt Floodplains ?

Herman supervises the entire process. Please contact him or let him know what he can do for you in the form below and he will call you back or email a reply. 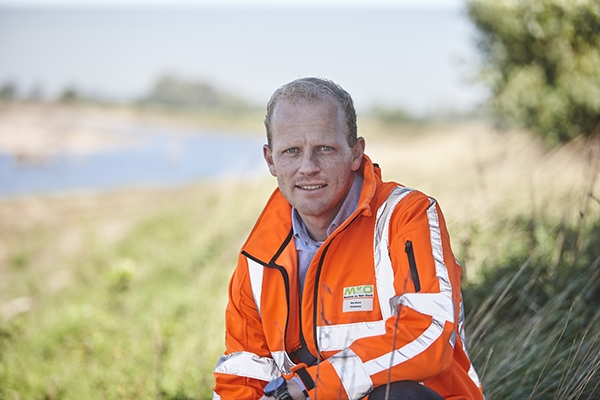